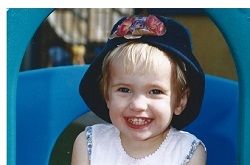 Emily doesn't lead the normal life of a young adult. She wants to move to Japan, study metaphysics, travel and enjoy life. But Emily has been unwell for the last five years.

After a series of illnesses as a child, Emily was diagnosed with autoimmune haemolytic anaemia or AIHA. Her mum Gail says that there were many early health issues that could have been the first signs. At 18 months of age Emily picked up Rotavirus and was hospitalised. At the age of 2, she had two major chest infections, then at 6 she started having blackouts. She had issues with bowel movements and her knees were dislocating. And then when Emily was 12, she started getting constant colds and chest infections. It was only when she appeared jaundiced that Gail worried that it was more than the usual winter cold.

Emily's GP arranged for Emily to have bloods taken immediately and the following day Emily was admitted to hospital. She was started on regular doses of steroids while the team of doctors worked out what exactly was going on. She spent two weeks in hospital and then she was readmitted to receive chemotherapy as treatment for AIHA.

"Now Emily is facing an even tougher fight", says Gail. "She's been diagnosed with common variable immune deficiency or CVID." CVID is characterized by a low level of specific proteins in the fluid portion of the blood which results in a decreased ability to fight invading microorganisms, toxins, or other foreign substances. The treatment is weekly infusions of antibodies which is expected to be necessary for the rest of her life.

Gail says that Emily's life has been drastically changed as a result of having a chronic, complex disease like CVID. Her social life is guided by her energy levels and health status and she needs to really listen to her body and know when to rest. And she has missed a huge amount of school. Fortunately, the wonderful support network at her school means she hasn't fallen too far behind.

The whole family has been impacted. Emily's sister Rebecca constantly worries about her little sister being sick and she finds ways to help her sister when she feels sick or tired. "As a family, our dreams and daily aspects of life have a different perspective and priority", reflects Gail.  Another challenge is that not many people know about primary immunodeficiency diseases like CVID and Emily's family admit that it can feel quite isolating.

Emily is now finishing high school and although her dreams of moving to Japan are on hold for now, everyone hopes that it is just temporary and that, with more research into better treatments, Emily's dreams will one day be a reality.

Emily hopes that people will feel moved by her story to donate to AIFA to support more research into new and better treatments. Can you help?  Please click here to make your donation now.

The Australasian Society of Clinical Immunology and Allergy (ASCIA) has more information on CVID here https://www.allergy.org.au/patients/immunodeficiencies/common-variable-immune-deficiency-cvid