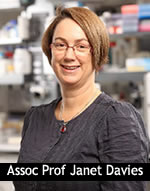 "Allergic rhinitis is one of the most common allergic conditions in Australia. It can make asthma worse and is generally under recognised and under treated," says award recipient A/Prof Janet Davies. "Pollens in the air are what trigger attacks of hay fever and, in many pollen allergic people, asthma. So being able to avoid pollen exposure is important. But while pollen forecasts are seemingly available on a number of websites, they're not based on real data and are inaccurate, in comparison to actual pollen counts produced by our team in Melbourne, Canberra and Sydney.

"Reliable pollen measurements and short term forecasts of allergenic grass pollen counts will be sent to the public via websites, apps and media outlets," says A/Prof Davies. "We're already publishing pollen forecasts via melbournepollen.com.au and canberrapollen.com.au and an app for Melbourne has generated over 20,000 downloads since the spring of 2013. To do this well, we need a standardized national pollen monitoring network to accurately forecast exposure to grass pollens that cause allergies."

In 2016 AIFA was delighted to annouce that this AusPollen project was awarded further recognition by receiving an NHMRC grant and further financial and in kind support. A/Prof Davies is now co-ordinating the project from the Queensland University of Technology.

The AusPollen program was initiated with the Australasian Society of Clinical Immunology and Allergy (ASCIA), Asthma Australia, Stallergenes Greer Australia, the Bureau of Meteorology, CSIRO and MeteoSwiss. For more information about AusPollen go to