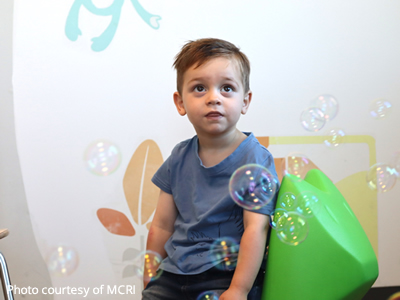 The first time Emerson tried cow’s milk he broke out in hives and his eyes and lips swelled. Emerson was just seven months old when he had an allergic reaction after having a few spoonsful of his sister’s strawberry smoothie.

There was no family history of food allergies, so Emerson’s mum Terry Greaves whisked him to the Emergency Department as a precaution, not knowing what was causing the reaction. But he didn’t require treatment and the symptoms went away within hours.

Months later, the family was shocked to learn that Emerson was not only allergic to milk but also peanut.

When Emerson was a newborn, Terry had signed him up to the Vitality trial at the Murdoch Children’s Research Institute’s (MCRI) in Melbourne. This trial is testing whether taking a vitamin D supplement over the first year of life can help prevent food allergies. Research shows vitamin D deficiency may play a role in an increased risk of food allergy, likely due to its role in shaping the developing immune system.

All children enrolled in the study receive a free allergy check when they turn one, to test for the 12 most common childhood allergens, including nuts, eggs and cow’s milk.

“It felt like we were in a whirlwind when we got the results from the skin prick test back. Everything got turned upside down,” Terry said. “I had no idea he had allergies when we joined the trial. I was just happy to be a part of something that would help further child health research, but we are so relieved that we did.

“Food allergies are so common, more than people realise.”  Australia has the highest rates of childhood food allergy in the world, with about one in 10 infants and one in 20 children up to five years of age being allergic.

Terry said for the trial Emerson took a vitamin D drop every day until he turned one, which was a simple process and became part of their routine.

She said she hoped that one day Emerson would be able to eat anything he wanted without the fear of having an allergic reaction. “One day he might enjoy that strawberry smoothie because of the food allergy research that MCRI is doing.”

To find out more about the study visit This email address is being protected from spambots. You need JavaScript enabled to view it.

The AIFA Ann Kupa Food Allergy Research Grant 2020 was awarded to a study at MCRI which may help achieve the vision of eradicating food allergy before school age.

AIFA is the only Australasian charity that is specifically funding allergy and immunology research.

Help us continue this work www.allergyimmunology.org.au/donate